Where better to enjoy a weekend diving than at Canada’s first National Marine Park. Fathom Five National Marine Park - Shipwreck Diving Capital of Canada. The park is made up of two components: 45 square miles of clear water and an archipelago of 19 islands. Sheer cliffs, limestone overhangs and large caves can be found both on the islands and submerged beneath the water. 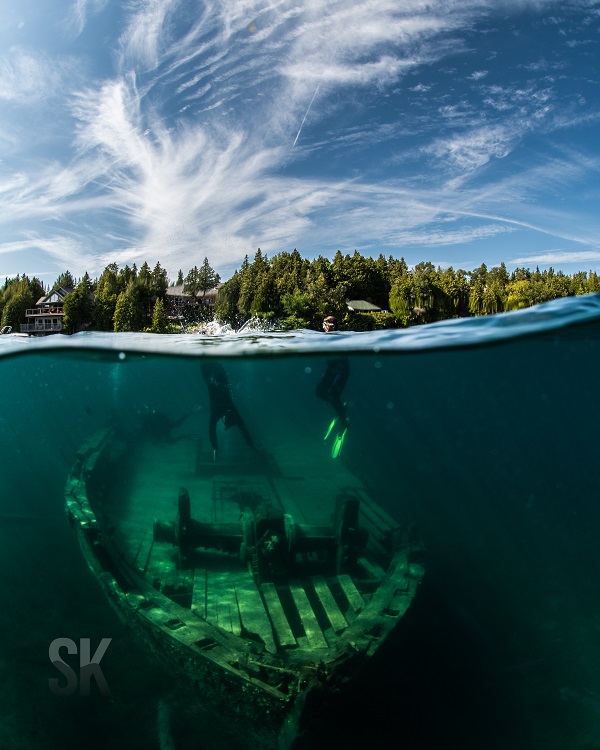 Explore an area where submerged forests, canyons and underwater waterfalls date back to a time before modern man. View the remains of ancient coral in this once tropical sea or watch the modern inhabitants, crawfish, bass and sculpin as they go about their daily business.

For the diving enthusiast, the remains of over 20 historical shipwrecks also lie beneath these clear, cold waters. In 110 feet of water off Echo Island lie the remains of the Barque Arabia. The masts lie broken and scattered but the bowsprit still reaches gracefully forward. Severe fall weather has left ships like the 213 foot steamer, W.L. Wetmore, laying 30 feet under the water’s surface.

Whether diving or snorkelling, the remains of the Wetmore provide excellent recreational opportunities. Swim over the massive timbers and explore the huge boiler which reaches within 10 feet of the lake’s surface. Then follow the trail of chain that leads to the anchor now resting among the rocks & debris off Russell Island.

One of the more interesting wrecks occurred when the 216 foot steamer Forest City was navigating in heavy fog on June 5, 1904. The intended course was between Flowerpot and Bears Rump Islands, but due to the fog she came to a brutally abrupt halt when the forward bow contacted the cliff on the northeast shore of Bears Rump. With the ship stuck fast the crew was rescued by the tug Joe Milton and for several weeks every effort was made to salvage the ship.

Filling with water she finally tore lose from the bow plating stuck in the rocks and slid beneath the waves. The Forest City lies in 60 feet to 150 feet of water with the stern still intact. The bow plating is still jammed in the rocks.

The Tobermory Hyperbaric facility is one of the few places in Canada to have a Hyperbaric dive chamber. Dive shops, sightseeing and charter vessels and the National Park Diver Registration Centre are all located within walking distance in Little Tub Harbour.

Diving Lessons are available for the beginner or to improve your skills - what better place to learn than in the crystal clear waters of Georgian Bay!