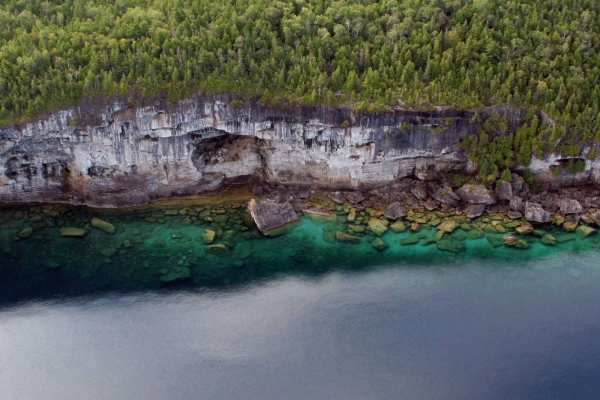 The Niagara Escarpment extends 700 Kms. from Niagara Falls to Tobermory, where the 200 foot cliffs plunge into the depths of Georgian Bay, only to reappear as islands such as Flowerpot and Manitoulin. This formation is part of an extensive geological phenomenon known as Barrier Reefs. Formed mainly by colonial tabulate coral during the Silurian Period (438 and 408 million years ago), the barrier reef structures completely enclosed the Michigan basin region of North America. While present in the subsurface of Ohio, Indiana, Wisconsin and Michigan, barrier reef limestone formed cliffs all along the Niagara Escarpment. The thickness of the main reef limestone varies between 100 and 500 meters. On the Bruce Peninsula, the cliff forming limestone is generally named the Cabot Head Formation.

It is worth knowing that during the Silurian Period, the North American continent was smaller than today, and was situated with a different geographical orientation. What is now north was then east. While the Bruce Peninsula is now at 45 degrees north of the equator, it was then 10 degrees south of the equator. The barrier reefs were thriving in warm, shallow, tropical seas. On the tectonic scene, the Northern Appalachian Mountains were being built by Taconic Orogeny as Baltica (Scandinavia and western Russia) collided with ancestral North America, closing the lapetus Ocean (the pre-Atlantic Ocean). Therefore the sea was warm and marine life such as coral flourished. `Rooted' in the quiet waters behind these coral were plant like animals called crinoids that waved in an effort to filter feed. More active cephalopods (uncoiled relatives of today's nautilus) swam freely in this sea.

As the animals died their remains settled and became part of the mud of the sea bottom. Tissue decomposed but the skeletons of calcium carbonate remained and accumulated. As the weight of the sediment built up, the lower layers hardened into limestone (calcium- carbonate). Magnesium bearing fluids concentrated and changed the limestone into dolomite (magnesium-calcium-carbonate), the rock we see on the surface today. Many of the fossils were destroyed by this recrystallization. Long periods or erosion and weathering have since exposed and sculpted the rock. The cliffs of the escarpment were formed as the more layered underlying rock was eroded away leaving the dolomite caprock unsupported. Eventually the caprock fell and the characteristic cliff face remained. Actually, the cliff face was at one time near Sudbury and has since eroded to here.

Ecosystem
The dolomite cliffs support a unique ecosystem. Dense cedar and maple forests are found along its crown while below the cliffs huge fallen boulders are coated with delicate ferns. This long thin ecosystem provides a unique habitat for animals and plants along its entire length.The cliffs aren't the best place to grow but they are one of the safest places to live as there are no forest fires on the cliffs and it was too difficult to log the cliff face. The barren looking cliffs are actually covered in mosses and lichens, while countless caves and crevices provide homes for ravens, turkey vultures, bats and swallows. The cedars are the most visible part of this strange and wonderful ecosystem.

In 1988 Dr. Larson of the University of Guelph, was studying the human impact on the Eastern White Cedars of the escarpment, near Milton, Ontario. Imagine his surprise when he found a 511 year old cedar! Since then he and his team have discovered old trees along the length of the escarpment, the oldest of which are within Bruce's two National Parks. In fact a 1645 year old cedar was found growing on Flowerpot Island, making it the oldest known living tree in Canada.

Even more surprising is how the ancient ecosystem survives at all. The cedars, lichens and mosses are growing on ledges and out of cracks in sheer rock faces, far from any soil. Fierce wind, ice, searing sun and rockfalls torment the trees and likely cause their dwarfed and twisted shapes. That 1645 year old cedar was only 1.5 meters tall! Canadian Bonzai trees?

In the spring of 1990, United Nations Educational Scientific, and Cultural Organization (UNESCO), designated the Niagara Escarpment a World Biosphere Reserve.

Maps of The Escarpment