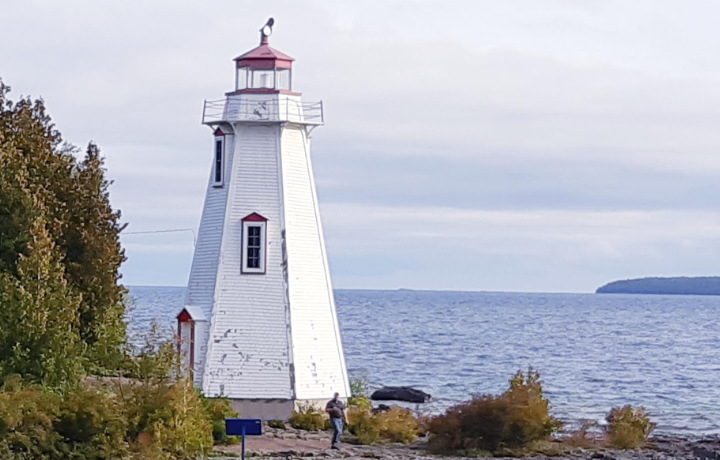 In 1885, the Department of Marine and Fisheries bought three lots at the entrance to the Big Tub Harbour for a lighthouse.  In the 1870's, Charles Earl, one of the first settlers in the township, hung a lantern on a tree where the lighthouse was later built.Earl's lantern guided ships into the Big Tub Harbour where they could take refuge from storms and high seas. Grateful for this service, sailors gave Earl coal, flour and coal oil.

In 1883 he was paid one hundred dollars a year for this service. He became the first keeper of the new light and remained so until his death.

The 43 foot lighthouse at the entrance to Big Tub Harbour is now fully automated with access for visitors.

This is a great vantage point to view Big Tub Harbour and watch the Chi-Cheemaun ferry arriving and departing! 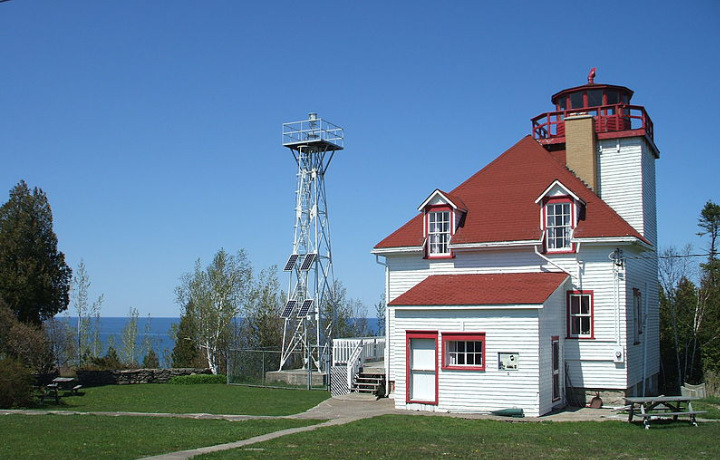 Perched 80 feet above Georgian Bay, on the beautiful Bruce Peninsula, the Cabot Head Lighthouse has guided ships for over 100 years. Named in honour of famous explorer, John Cabot, this site offers spectacular views of the Niagara Escarpment and Georgian Bay.

In 1968, the original tower was demolished and replaced with an automated light. Fifteen years later, the Friends of Cabot Head completely restored the lightstation. Visitors are now encouraged to visit the lighthouse museum an walk the interpretive trails.

Cabot Head Lighthouse is a wooden dwelling with an attached 49' square wood tower rising from one corner. Its original light, operational in 1896, could be seen for 16 miles from its perch about 80' above water level. The area was named in honour of explorer John Cabot. Situated on a cliff 1/3 mile east of Wingfield Basin (a nature reserve) in Georgian Bay, the lighthouse was constructed by John George of Port Elgin and Richard Webb of Southampton.

The Friends of Cabot Head are a volunteer organization that maintain and staff the Cabot Head Lighthouse and Museum. The Lighthouse is open daily from May - October 10 am - 7pm and the Lightkeeper's Locker store is open 10am - 6pm. 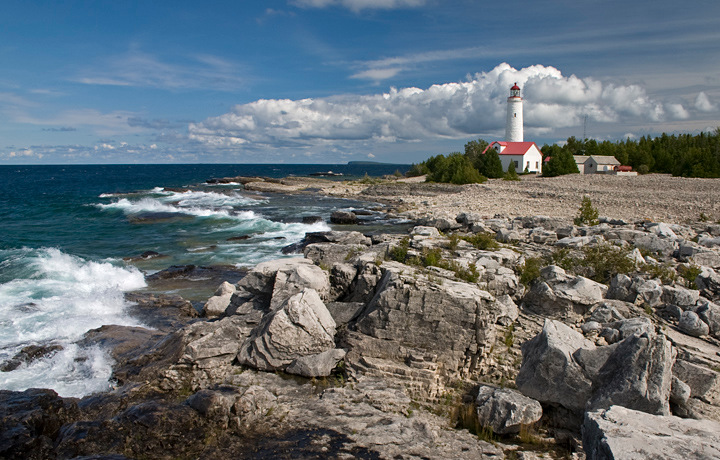 When you travel on the ferry between Tobermory and Manitoulin Island, keep an eye out for the Cove Island light station. It will be on the west side, about 20 minutes from Tobermory. Its 24 metre (80 ft.) tower is one of six Imperial lighthouses built in the 1850's. The Cove Island light was first lit on October 30, 1858, following a delay in the shipping of the lens from France. The fuel first used was sperm whale oil! Today the light is electrically powered thanks to a submarine power cable linking Cove Island to Tobermory.

The light from the 500 watt bulb is magnified to about 10 times its power by six prisms that revolve around the light. The prisms are separated by sections of frame giving the impression that the light blinks on and off, when it is actually on all the time. Ships can see the Cove Island light up to 80 km. away (50 miles) depending on the weather.

Construction of the lighthouse on Gig Point began in the late summer of 1855. In 1856 there were seven masons and stone cutters, ten labourers, one blacksmith, a foreman and three horses engaged in the work. Such were the demands of navigation that the crew maintained a temporary light during their presence on the island. Strategically located in the wilderness of uninhabited islands, the lighthouse frequently provided shelter for mariners in distress, such as the crews of the schooners San Jacinto, lost at Yeo Island, and Sarah Jane wrecked on Manitoulin Island and that of the Charles P. Minch.

Technologically, the light passed through several stages, an Argand lamp utilizing sperm whale oil, then a flatwick coal oil lamp, and in about 1900 an oil vapour light in which vaporized kerosene was burned in an incandescent mantle. Sometime during the 1950's electrification by means of an on-site generator was introduced, and in 1971 a submarine power cable was laid from the mainland. A steam powered foghorn was erected in 1883 and a radio beacon prior to 1940. The lives of the keeper and his family revolved entirely around the maintenance of the light. Cove Island Light station still stands as a beacon to all sailors passing by and it is a reminder of days gone by. 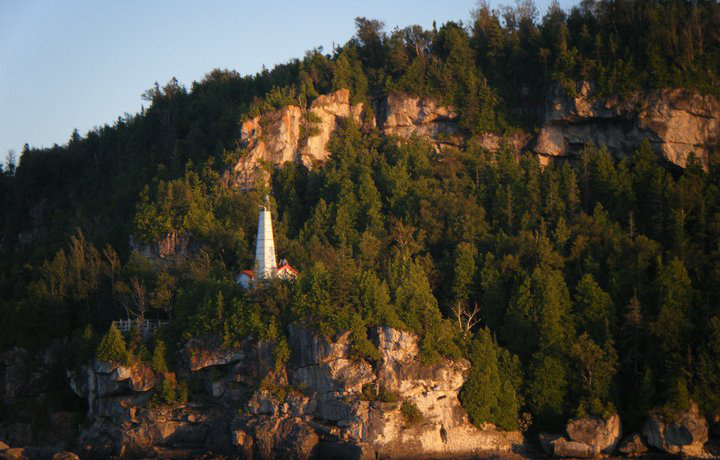 In 1896, the Flowerpot Island Lighthouse was built to guide ships as they travelled from Georgian Bay to Lake Huron.

The Flowerpot Lighthouse was built of wood and over the years the elements took their toll.  In 1968, a new steel tower was erected and a foghorn plant was installed. A new dwelling was also erected but the original one still stands and is in good condition.

The station is part of Fathom Five National Marine Park and is now completely automated station. When you visit Flowerpot Island there is a hiking trail that leads up to the lightstation.

A side trail with steep stairs leads to an observation deck and the light tower.